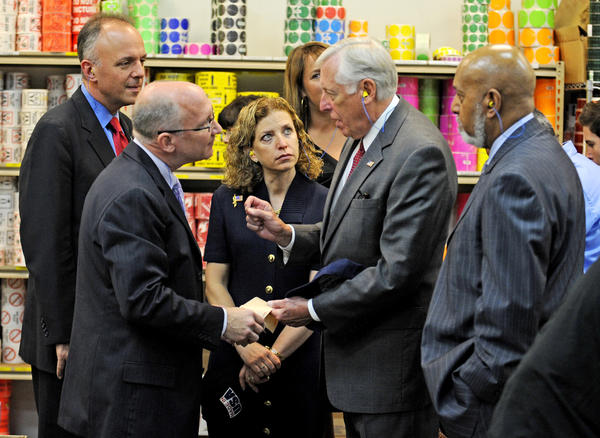 David Perlman, owner of A & M Tape & Packaging in Sunrise along with Democratic leaders Ted Deutch, Debbie Wasserman Schultz and Alcee Hastings, listen to U.S. House Democratic Whip Steny Hoyer (center), as they take a tour of the family run business that manufactures cardboard shipping boxes. Democrats are working to enact the 'Make It In America' agenda: a plan to rebuild American manufacturing and create well-paying jobs.(Susan Stocker / May 21, 2012)

— Scores of industrial-size rolls of bubble wrap, miles of packing tape and more than 5 million cardboard boxes fill A&M Tape & Packaging, and on Monday they became the symbol of a potent political issue: American manufacturing jobs.

Started in 1977 with four employees, A&M is a success story, with almost 60 workers today.

And it's the kind of story that appeals to politicians, four of whom toured the company on Monday including U.S. Rep. Steny Hoyerof Maryland, the No. 2 Democrat in the U.S. House. He and a trio of South Florida colleagues — U.S. Reps. Ted Deutch of Boca Raton, Alcee Hastings of Miramar andDebbie Wasserman Schultz of Weston — are part of an effort to position their party as a friend to workers in this election year.

It's a critical mission for the Democrats, President Barack Obama included. With unemployment and foreclosures high, public opinion polling in Florida and elsewhere shows the economy is by far the biggest issue on the minds of voters.

And focusing on manufacturing jobs is about as American as apple pie and motherhood. "They [overseas producers] may make some things better than we do, but very, very, very few things because America makes it the best," Hoyer said.

Last week, Vice President Joe Biden was in Ohio — like Florida a swing state in the November election — talking about manufacturing and economic security for middle-class workers.

On Monday, Wasserman Schultz, chairwoman of the Democratic National Committee, said there's some good news: Nationally, the economy has added 820,000 private-sector jobs in 2012, including 139,000 in manufacturing.

One of those new jobs is in A&M's tape and label division, which just added a worker because of increased demand. The company has two shifts turning out various kinds of packing tape, much of it printed with colorful logos of customers like big retail chains.

The company, which can make just about any kind of box imaginable — from a special shape for shipping a car bumper to packaging to protect cherished artworks — has moved into the fast-growing market of making boxes to ship wine for vineyards.

David and Amy Perlman, the company's owners, aren't especially political. They're registered Democrats but not active in the party and don't give political contributions. They are interested primarily in the economic success of the community, their company and their employees.

"We compete against other products that are imported," David Perlman told Hoyer. "And I just tell the customer, look, I may not be able to compete on price, but at least it's made in the U.S. We do lose out on some sales because of that. I'd rather it be that way because I think it's just really important."

admin
Permalink
Uncategorized
Made in USA, packaging supplies
No comments
1306
0
0

View all posts by: admin